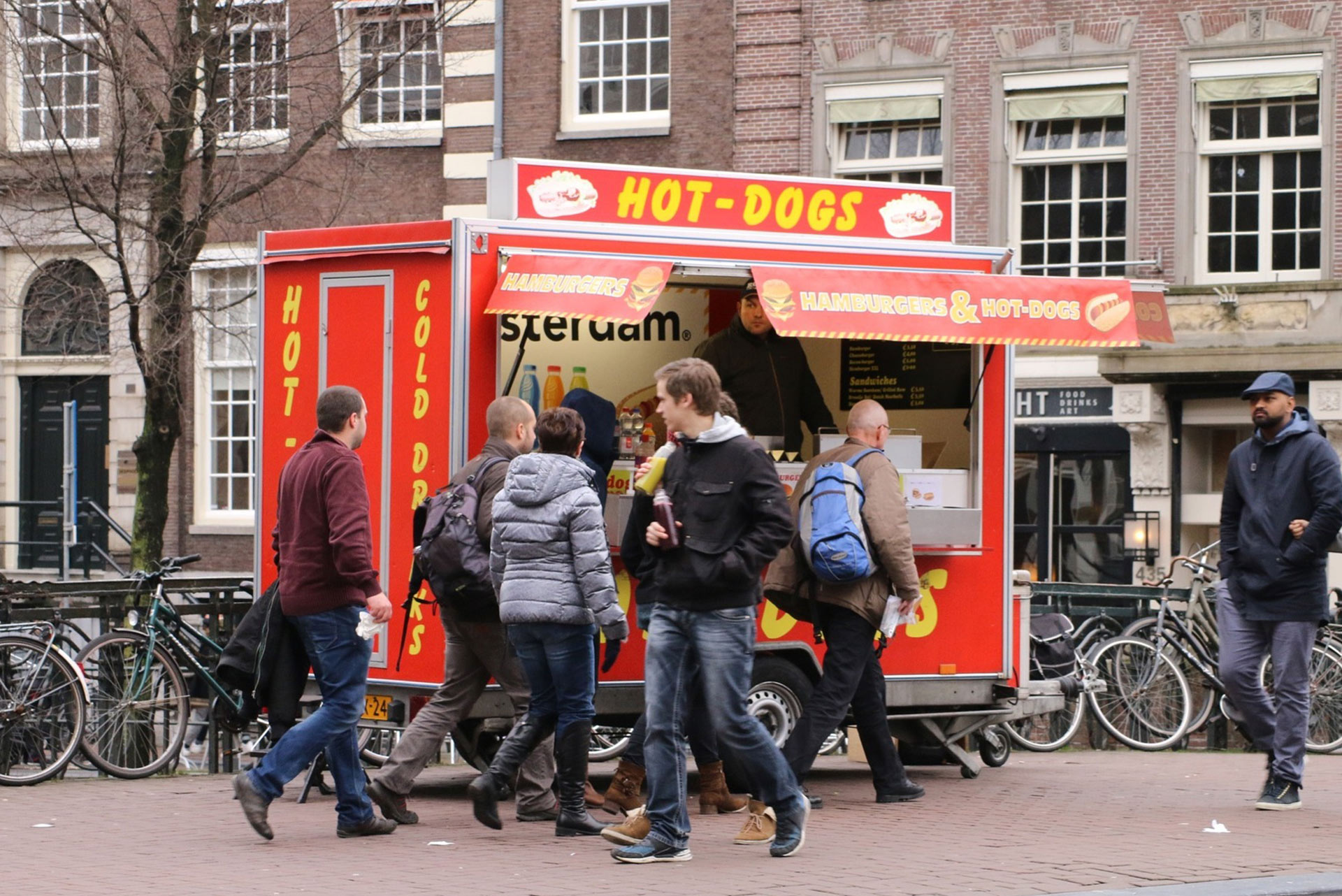 Once upon a time there was a young immigrant looking to get ahead. Times were tough and work was scarce. Every day he walked into the city to find work and every night he walked home again. As he walked home one evening, the young man noticed how hungry he was. What he wouldn’t give for a good hot dog. All at once it came to him – why not sell hot dogs to other travelers on this very spot?!! Because the young man appreciated good food, he fantasized about his hot dogs and how they would have to be the very best so that people would come back to his stand day after day after day.

On the first day, he sold all six hot dogs. Early next morning, he reinvested all his cash buying twelve of the best hot dogs, twelve of the freshest buns, and more of the best-tasting condiments money could buy. That evening, yesterday’s six customers returned, bringing along six friends. And the business grew and grew.

Time passed and the man now had a family. Business had been good, the cart had been replaced by a store-front stand, and he’d saved enough money to send his son off to college. When the son returned with a brand new degree to join the family business, the father asked him what he had learned at college. His son said, “Dad, don’t you read the papers? There’s a recession coming and times are going to get tough!”

Well, it was true that hot dog sales had leveled off to the pace at which the man and his wife could cook and serve the hot dogs, but their regular customers always came back to enjoy the best hot dogs, served on the freshest rolls, topped with the best condiments money could buy.

So the father asked what this “recession” would mean for the family business. His son replied that the big national chains got “lean and mean” during a recession. The father really didn’t see the connection between the big national chains and the family’s hot dog stand, but after all, his son had gone to college and learned business, so he reluctantly agreed to let the son begin getting their hot dog stand “lean and mean”. After haggling with a discount butcher, the son found a hot dog that didn’t taste quite as good but it looked the same (the customers probably couldn’t tell the difference) and the son saved $2.00/box.

Then business began to slow down. It was nearly imperceptible at first, but the father began to miss some of his “regulars”. When he mentioned this, his son said this was further proof of the recession and pointed out that other hot dog vendors down the street were discounting their already lower prices. Frankly, the father had never paid too much attention to his competitors’ prices because what they served could hardly be considered a hot dog for lack of flavor.

Nevertheless, sales had declined and since he was not a business expert like his son, he agreed to reduce their prices. To offset the dollars lost by the price reduction, the son found a discount baker selling buns that didn’t taste quite as fresh but looked the same (the customers probably couldn’t tell the difference) and the son saved $1.50/box. Unfortunately, the reduced prices didn’t seem to bring more business. Each week, fewer and fewer “regulars” showed up, and sales continued to slump. So the son began searching for cheaper condiments…

As sales continued to slide, the son decided to leave the family business and go to work for a big national chain. The father thought about how lucky he was to have a son smart enough to predict, that after all those successful years, the family business would get bad. Because the hard-working parents had saved enough money (during all those successful years) to retire on, the father decided to sell the hot dog stand…

…to a hard-working young immigrant with a novel idea-why not sell really good hot dogs to people who like himself appreciated good food?!! Of course, the young man thought to himself, his hot dogs would have to be the very best so that people would come back to his stand day after day after day.